DHAKA, Bangladesh, — Excelerate Energy L.P. (Excelerate) hosted the Bangla LNG Workshop 2019 on November 6 in Dhaka. The one-day event brought together over 120 industry leaders in the public and private sector to discuss the pertinent topics surrounding the global LNG industry and gas markets as they pertain to Bangladesh.

Last year, Bangladesh became the 39th country to join the LNG import marketplace through the delivery of the country’s first LNG import terminal, Moheshkhali Floating LNG (MLNG). The workshop focused on the critical role LNG, along with new natural gas infrastructure, will play in facilitating Bangladesh’s growing economy and its ever-rising demand for energy. 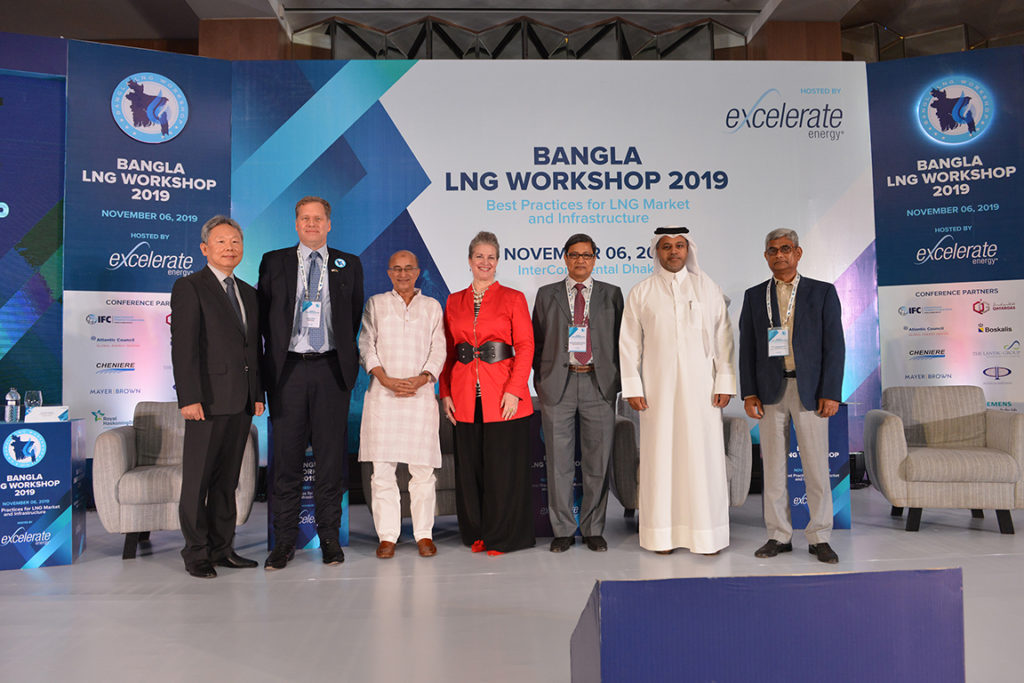 Among the distinguished guests that attended the event, the Honorable Energy Advisor to the Prime Minister Dr. Tawfiq-e-Elahi Chowdhury and the Deputy Chief of Mission (DCM) JoAnne Wagner of the United States Embassy Dhaka delivered keynote speeches.

Commenting on the first year of importing LNG, Dr. Chowdhury stated, “Sometimes if you want to make fast progress, gut and intuition must work. And those things make a difference in terms of speed.” He continued, “I am happy to say the supply has been consistent, and Excelerate has done a great job in a short period of time, and I keep saying this is a job we did together. I hope this continues.”

“We believe energy, and LNG in particular, is perhaps the most exciting [sector],” stated DCM Wagner. “We think that by developing a free and open natural gas market throughout the Indo-Pacific, the United States is absolutely committed to bolstering a resilient, reliable energy supply that can support stability and shared prosperity right here in Bangladesh.”

“Bangladesh has astonished the world with its dramatic entry into the LNG market. To receive more than one percent of total global LNG production in the first 12 months of operations is truly a remarkable achievement,” stated Excelerate President and Managing Director Steven Kobos. “The Government of Bangladesh and Petrobangla have a lot to teach the rest of the world about how to put together a successful LNG import program.”

Also in attendance was the H.E. Ambassador Ahmed Mohammed Nasser Al-Dehaimi of the State of Qatar to the People’s Republic of Bangladesh and the H.E. Ambassador of the Republic of Korea Hu Kang-ild. Representatives from IFC, Qatargas, Atlantic Council, Boskalis, Cheniere, The Lantau Group, Mayer Brown, Poten & Partners, Royal HaskoningDHV, Siemens Bank, and Technica participated in the workshop.

In its first year of LNG imports, Bangladesh has successfully delivered 60 cargoes (equivalent to 3.6 million tons of LNG) imported from eight countries, providing over 180 million MMBtu of gas into the Chattogram region of the country. LNG imports represent a 15 percent uplift in gas supply for the country, allowing for several power plants, fertilizer factories, and industries that had previously been shut down due to a lack of feedstock, resume production.